The Early Developers of Naples Islands would be smiling today! 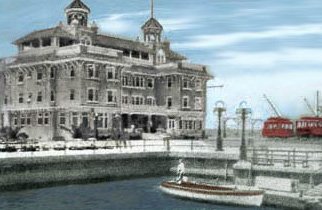 Gondolas today near where the Hotel was….

The Canals and Gondolas today!  Over 110 years  later….

Naples, California — Naples History-Circa 1906 shows Hotel Napoli, a beach resort where guests could arrive by the electric “red car” and stay at the beach some 35 miles from Los Angeles.

The image shows a boater in the bay and two Pacific Electric Red Trolley Cars. The Pacific Electric interurban was a commuter rail system in operation till the 1960’s. It took Los Angeles visitors to Naples, the community of canals adjoining Alamitos Bay at Long Beach.

The old photo colorized from a black & white, which was taken at a time when Naples was a feature of the Triangle Trolley Trip excursion that began in Los Angeles.

Developers in Naples figured that if they could get people out to see the beauty of the beach, they’d have them sold on a house which was at that time considered “in the sticks”. Those with a sense of adventure,  imagination and foresight  invested $100 to $1000 on a piece of land that can now is worth $500,000 to $8 million.

Naples did not occur by accident.  A.M. Parsons and his  son, A.C., sold lots on the “Peninsula” in 1903. They sold the dream of an Italian style resort village with canals and gondola rides (which actually exist today).

Naples Company used the money of financier Henry Huntington to help build this community that A.M. Parsons envisioned, but in reality it was a  marshland and was difficult to build on.

When the press ran headlines, “Bold Scheme Not a Dream,” around 1907, Parsons continued to forge forward with his plans, but Huntington’s money wasn’t enough. A plan to make East 2nd Street a grand canal was never completed.

Today it is known as 2nd Street in Naples & Belmont Shore, and it has become a thriving shopping and dining district that connects  downtown Long Beach with its very own coastal – beach regions to the south.

Approx. one mile of canals in Naples include a large semi-circular Rivo Alto Canal and a shorter, straight Naples Canal. Lining the canals are docks and walkways fronting homes that overlook the waterways. In the evening you can see residents of the quaint community sit on their decks and patios, watching the sunset, and waving to the gondolas and romantic couples passing by. It actually retains a flavor that could be Italian in many ways, though the weather is clearly Southern California beautiful.

Five small bridges (some with room for one car at a time) allow you to drive around and take a look at all but one tiny  island (Treasure Island). You can also park your car around the Italian fountain and set out walking to explore. The walk is delightful.  The fountain park has just had a replanting of trees and the fountain has been repaired to be in operation full time again.

What remains of the Parsons & son – family dream is appreciated by many who live on the islands that make up Naples. Many would love to live there but can’t afford the expensive water properties that come with docks. So for the rest, the Gondola Getaway ride  at www.gondo.net  provides the excitement and romance for around $100, minus the huge mortgage, taxes and all that goes with purchasing and maintaining multi-million dollar homes. If Parsons were alive today to see what his dream has become, he’d be smiling.